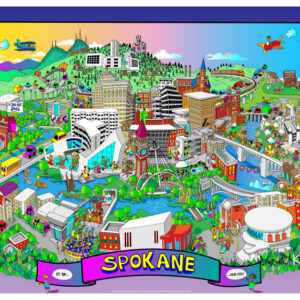 This poster is a signed limited edition of 1000. 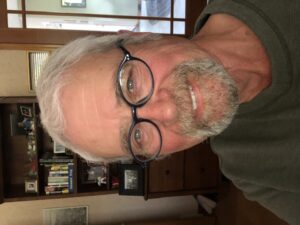 Growing up in Spokane, Howie King would spend his time drawing cartoons on the back side of his assignments all throughout grade school. This fascination with little drawings led to him being a cartoonist for his high school newspaper and then cartoonist for The Daily at the University of Washington.

Following graduation, Howie went to work for the Seattle Post Intelligencer, doing political cartoons, feature cartoons and magazine covers, as well as working on advertising campaigns and posters for Seattle businesses. His weekly strip at the Post Intelligencer was followed by a syndicated cartoon strip involving characters who lived in a mobile home park and traveled in an RV, called “The Wheelers”.

In his spare time Howie was both a principal of a number of schools as well as a superintendent of two school districts. Throughout his careers in cartooning and education Howie remained active in the music field, and played in a number of bands while also recording original music. Currently Howie can be heard playing a solo act in a number of venues in the Spokane area.

Earlier this year Howie completed a poster displaying his version of Spokane, the city he was born in. The poster’s depiction of the city’s old and new architecture, combined with cartoon folks involved in the variety of events held in Spokane, presents a lively and fun display of aspects of this unique city. There’s always something new to find as you explore the poster; in the same way as there’s always something new to find when you’re exploring Spokane.

Stream the music of Howie  King on:

Important -
The area to upload your art is located in the "View Cart" area. After chosing the type of product, and size you "Add to Cart". Once added to the "Cart" you then "Click", " View Cart" and there you will see the prompt to upload art work.

Before you upload your artwork or work order file please review our file formats and artwork guidelines below as to allowable formats. Please use the same file name you submitted with your order or quote request.

Acceptable Programs:
• Adobe Illustrator - any version up to CS5 files supported .ai .eps. pdf.
• Indesign - up to CS5, Package all art and fonts being used
• 4 Color Process printing is used for reproducing high quality graphics with photo type images. Digitally created process images should be created in or converted to CMYK format (cyan, magenta, yellow, black). Some programs, such as Photoshop, default to RGI3 format (red, green, blue), and must be converted to CMYK. COLOR WILL CHANGE when converting from RGB to CMYK and ADJUST COLORS AS NEEDED.

Both created & scanned images must have a resolution of 125 dpi or higher at final print size. Resolution cannot simply be increased in the program if working from a low resolution file. This merely spreads the original pixel information across a greater number of pixels and does not improve image quality (most internet images are a low resolution 72 dpi).

Scanned Images cannot be manipulated. Text, logos, borders, etc. should be created in a drawing/layout program such as Adobe Illustrator, Freehand or Corel draw (this allows us to make necessary adjustments to the digital file such as adding trap).

Convert all text to paths, curves or outlines. If this is not possible send PC Truetype, Opentype, or postscript 1 or postscript 3 (truetype preferred).

Files submission options:
Files up to 10 megs can be emailed to artwork@instantsignfactory.com

When requesting a quote or when placing an order use the upload utility provided in those forms to send your files.

All other file extensions are disallowed from uploading and attempts to do so will result in a failed upload. We log all IP addresses.

Files may be bundled using:

If your work order artwork consists of several files we recommend using a compression utility to bundle them before uploading. This avoids confusion as to file ownership if several customers are uploading more then one file at the same time. Files with the same name can not be over written.